What is going on here?

Spoiler warning: This post contains a picture of one of the Raven's matrices from the IQ test suggested in the Less Wrong reader survey.

http://iqtest.dk  (If you want to go and take it, do so before you look at the picture below!)

I scored 130 on it, which makes me think that the leetle grey cells may be falling apart under the influence of alcohol and old age. In youth, I usually got between 150 and 160 on these things (they're not terribly accurate near the ends of their scales).

Anyway, my powers are obviously declining. What's worse is that even when not under time pressure, I can't figure out what the answers to the questions are. Can anyone figure out which of the eight possible choices here completes the figure? And explain why? It's completely opaque to me. 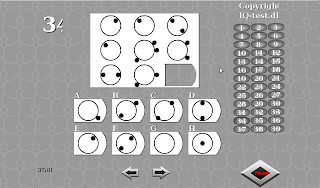 Aha! http://www.jperla.com/blog/post/how-to-ace-an-iq-test gives an explanation of how these things work. After reading it I went back and can now complete the test in about 10 minutes (which gives me a score of 145+, apparently that's as good as you can do.). Most of the answers are indeed obvious in retrospect, although there are a couple where I can't decide between two choices, and one where I'm a little sceptical I could have worked out the pattern having never seen it before.

The particular one above works by adding the dots. dots outside the figure cancel with dots inside. As far as I can see, the dot positions are irrelevant and random. In terms of crossword clues, this would be OK in the Telegraph but not meet the standard for the Times.

In fact, I've now got some thoughts about the analogy between IQ tests and cryptic crosswords. They seem closely related in terms of what they're measuring, although obviously these visual patterns are language neutral, whereas I can't see how you could hope to do a cryptic in English unless you were a native-standard speaker. I might try to work this up into a blog post later.
Posted by John Lawrence Aspden at 8:14 PM