Imagine you live in an idyllic farming village, way up in the high mountains. There's no road, and the trek in is only for skilled mountaineers. As a result, you've literally never seen a stranger.

Your world consists of maybe one hundred people. You know all of them, you trust most of them.

It's not entirely paradise though. Legend has it that around 500 years ago, two men got into a drunken fight in the village pub and one of them was killed. People have been talking about it ever since. 1512 is known as 'the year of the murder'.

So I want you to imagine that you're lying in a field, not far from the village, and it's going dark, and you see a dark shadow moving around in the woods. What would your principal worry be? 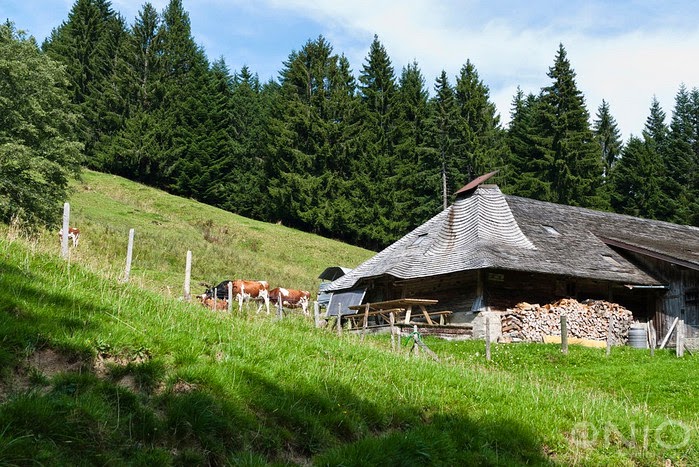 How nice it would be to live in such a world. What would we need to do to turn our current crime-ridden society into such a safe place?

To start, let's look at the murder rate for modern Britain. Wikipedia tells me that it's 1.23 murders per 100,000 people per year.

What about our village?

Well, we have at least 500 years of murder records, and there's been one murder. There are one hundred people in the village, so that's fifty thousand people-years per murder, so on the same scale the murder rate looks like it might be around 2/100000 people/year.

And yet, people worry all the time about horrible happenings. My own parents (who live in a remote village in the hills) have so many locks on their doors that it can be quite time-consuming to get in and out of the house. And they lock them when they are in.

But it's not just them. I live in Cambridge, one of England's safer cities. Pretty much everyone I know has a degree, and you can reasonably assume that the milkman is only milkmanning to support his interest in baroque Catalan poetry.

And yet when my female friends leave the pub alone, I offer to walk them home. And they often accept. Or indulge in expensive and fattening taxis because they don't feel safe. If they walk home alone, I worry about them.

I myself have been known to feel slightly wary walking down Regent Street (a wretched hive of scum and villany where young people go to enjoy themselves in much the same way that I did when I was their age) on a Friday night.

The control of violent crime is one of the most explosive and politically sensitive issues there is.

What could possibly be going on?

You're a monkey. An extremely clever and dangerous monkey, but a monkey nevertheless.

And monkeys live in groups of one hundred or so. The same size as our village.

And if a monkey notices someone getting murdered every day, then it would be wise to be utterly terrified. Because there are not so many monkeys to go round, and chances are that if things continue like this, the monkey and everyone it knows will be dead in a few months.

So the monkey will be well advised to move heaven and earth to investigate what is causing all the killings, and fix it.

And this method of estimating the danger is hard wired. Because all our ancestors for a very long time indeed lived in groups of about the same size. So there's a simple rule: Murder every few hundred years-> not to worry, everything is perfectly safe, indeed unrealistically safe, things can't be this good. (Which is what you feel when you think of the village in the hills.). Murder every year or so-> worry a bit, keep your guard up, although it's probably wiser to worry about tigers and starvation and disease and such. Murder every week -> PANIC!! PANIC!!. And rightly so. This rule served our ancestors well for a long time.


But you're a monkey living in a society of 60 000 000 people, which is a number so big that your monkey-brain has trouble with the number of digits in it, let alone the actual number, which is ridiculously large and absolutely beyond imagining.

And you find murder very interesting indeed. The bookshop in which I am sitting has a whole section devoted to gruesome and horrifying imaginary murders that people have made up for entertainment, and another whole section devoted to artificially scary accounts of particularly awful and memorable murders that actually happened, and there is a whole entertainment industry devoted to gathering news of all the murders that happen throughout Great Britain (which is a very great number. 1.23*600/year, so a couple every day or so), and selecting the most scary, terrifying and thus entertaining ones and delivering these stories to your poor monkey-brain by Marconi-waves,  which brain responds by following its ancient algorithm and getting into a God-almighty tizzy.

And that is the answer.

How do we turn our scary modern society into a tranquil mountain village where almost nothing bad ever happens?

Obviously this is a counsel of despair. It can't be done. Such things are way too interesting and enjoyable to ignore.

But at least try rank the fear with the other unpleasant self-inflicted side effects of modernity, like getting fat because incredible amounts of delicious and unnatural food are just lying around everywhere for the asking, and monkeys know to eat as much as possible in such circumstances because they may not last.

And do not say to yourself 'I live in the midst of dangerous chaos, which I would do well to fear'.

But rather say to yourself 'I live in the safest society there has ever been in the history of the world. Nevertheless, I fear crime, because I cannot help reading about crimes all the time, and this scares my brain, which is not really designed for this sort of thing.'

And try to relax a bit, and not do silly things like changing the way you vote on the basis of which of the various groups of political scum is pretending the hardest about how much they can do about a problem which effectively ceased to exist hundreds of years ago.

Or if you are a member of a group of political scum, try coming up with memorable crime-policies, like barbecueing anyone convicted of murder in Trafalgar Square, which will cost almost nothing, hurt almost no-one, and give everyone in the country a nice satisfying feeling of justice well and truly done, as well as providing an excellent source of entertainment for the sadist community.

But try not to believe that it will actually help. The problem is already solved.