I am not at all sure I how I have turned into the sort of person who posts baby photos, especially since the baby in question is not mine. 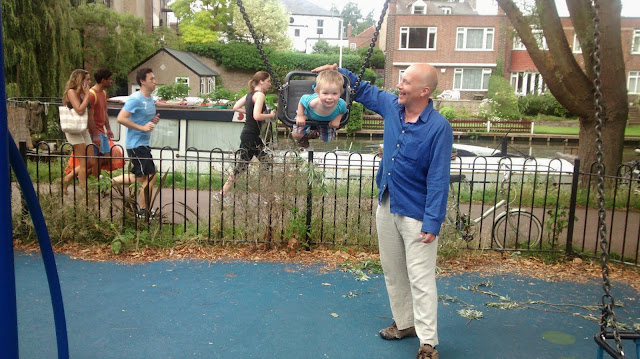 In my defence, little Cameron appears to be a one-baby conversion weapon aimed directly at the hearts of the childless.

Look at that smile!
Posted by John Lawrence Aspden at 11:11 PM 0 comments

They speak ill of Ryanair, but I don't know why.

I used to like flying, but pretty much gave up on it about ten years ago because the experience had become so miserable. The final straw was some cunts called 'First Choice', who put a television I couldn't turn off right in my face and advertised holidays to me throughout the flight. By the time I got to London I'd completely packed my ear canals with shreds of the Daily Telegraph and they were still coming out in the shower a month later.

Wanting to visit a friend in Stockholm, I got my first Ryanair flight from Stansted to Vasteras last Tuesday. Everyone I spoke to beforehand said: 'Oh, Ryanair, enjoy...', in much the same way that people used to say, 'Ah, Stalingrad...' to Germans.

Their website's easy to work, and they make it perfectly clear that they'd really like you to print out your boarding pass in advance and that you shouldn't take the piss with their cabin baggage allowance and that it will cost you if you do.

They also offer the chance to reserve a particular seat in advance for £5. Bargain I reckon. I enjoy flying if and only if I can see out, and I always used to have to turn up early to negotiate at the check-in desk for a window seat.

Contrary to everyone's predictions, I paid exactly the advertised price, plus my entirely voluntary and deliberately paid 2x£5 window-seat fee.

I stuck three days worth of clothes and some books in my satchel, and it was about half the size allowed. I cycled in to Stansted airport at about 9:30 for my 10:30 flight, locked my bike in the bike shed right in front of the terminal, floated happily through courteous security, and arrived at the boarding gate at around 10:00. Just time for a coffee while the plane boarded, and as I finished it the last passenger was going through. I followed them onto the plane, was greeted by a smiling stewardess, and took my seat. My bag fitted neatly into the footwell.

I'd taken earplugs because everyone had been telling me about relentless advertising and screaming children. I ended up not using them.

I noticed exactly one child on the plane, who kept saying as we were taxiing 'Are we flying yet Mummy?', and then when the plane started to accelerate and lift let out one long, terrified yet fascinated scream which kept rising as the plane kept rising and finally terminated in an awed gasp as we levelled out. Utterly endearing and I know exactly how she felt!

As for advertising, if there was any I didn't notice it. No wretched music, no nasty airline food, no pitiful in-flight movie, no sodding televisions on the backs of seats, just looking out at the clouds and the sea and the fields and the towns and the coast and the boats and the lakes, and chatting to the lovely girl sitting next to me who'd been a fellow student of my university. If this is what no frills means I'd pay extra for it.

Just as I was thinking to myself "I wish someone would sell me a coffee", someone came up and sold me a coffee. For about £2.50, which seemed remarkably unexploitative given the captive nature of the market. And it wasn't exactly the hard sell. I pretty much had to grab her ankles.

Exactly on time we touched down in Vasteras. It's a delightful little airport with one tiny building. They look at your passport and say 'Welcome to Sweden'. And that's it.

Outside the 'Flygbuss' to Stockholm is waiting. 'Where can I get a ticket?', I said, and the driver said 'Just there, but don't worry, we won't leave until everyone's aboard'. 'Do I have time for a smoke?', I said. 'Yes of course', he said. 'I'll come and get you when we want to go'.

In the centre of Stockholm 75 minutes later.

I not only enjoyed this flight, I enjoyed it lots.

The flight back was much the same. The flygbuss gets to the airport fully two hours before the plane leaves, so I asked at the terminal information desk if there was anything to do. 'No', said the lady. And then after thinking, she said 'But there are some interesting aeroplanes here for the forest fires, and as long as you're back here 40 minutes before the flight you'll be fine.'

She was right on both counts, so my last look at Sweden was a long walk through the forest with occasional planes and helicopters, and getting rid of the last of my kroner in the lovely airport cafe before going through security. On the other side of security was a 10 minute wait in a glass box before we boarded the plane.