Credit where credit is due. This year I remembered Mother's Day the day before, and it's a bit too far to drive for a day (I think. I know some people do 300 mile round trips for fun!). 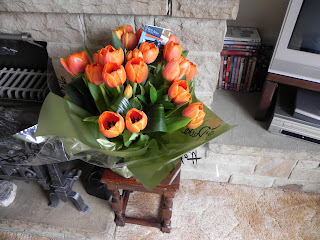 I thought about asking my sister to take something to Mum for me, but that seemed a bit lame, so I found a Sheffield florist on-line and asked them if they could deliver on the day, which was a Sunday.

I asked for their advice on what to send, and then managed to give them an old credit card number which had expired. They rang back later and told me very apologetically that it hadn't got through, but luckily I realized what I'd done and gave them the new one.

They produced a really nice bunch of tulips for about £35 and delivered them at 11 o'clock on Sunday morning. I think they did the delivery themselves rather than using a parcel service. My parents live a fairly long way out of Sheffield itself so it must have been a long trip on what I assume is their busiest day of the year.

I was at a cricket net at the time, and when I got home I had 6 missed calls, all from Mum. (She doesn't normally do that.) Of course I rang back. A couple of days later she sent me a hand-made thank you card and the picture above.

I've no idea whether they're a big or a small operation, but although their website makes them look like a large and expanding firm, their service was as personal and obliging as if I'd rung a friendly corner shop.
Posted by John Lawrence Aspden at 8:42 PM 0 comments

The Rise of the Machines

I made the last post from Chrome rather than Firefox. I haven't installed adblock in Chrome. My screen is now covered in adverts for pest control firms. I think the singularity may be some years off yet.
Posted by John Lawrence Aspden at 3:36 PM 0 comments

The Demon out of Nightmare


Imagine what it's like to be hunted by the basilisk.

Just a look will turn you to stone. You are naked, weaponless, powerless to hurt it unless you can get close enough to kill it with your bare hands. 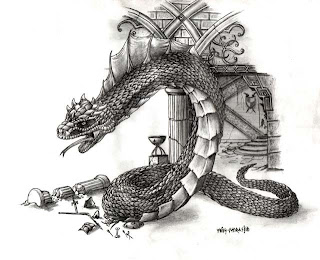 The basilisk can disguise itself well. It can lie motionless for hours, and when it does you can't see it until you're very close, but if it sees you first, you are dead.

It can move faster than you. It can fly across the ground faster than any living creature can run. It can rise into the air and see a huge area at once, and it can kill over all that radius. It has sharper eyes than any natural being.

It has the power to control the world itself. Sometimes, even when it is nowhere near, plants or rocks will suddenly coil and deform, wrapping round you. Very often, when you are running from it, you will find that it has created a ravine or a gully or a trap in front of you, cornering you. Sometimes the ground itself will grow teeth, and bite into your legs, holding you in place. Once you are trapped, all you can do is wait in agony for the basilisk to come.

Often it will not even bother to come and kill you. It will just leave you to starve in agony, tearing at your wounds, trying to get free.

It knows your habits and your favourite places. Sometimes it can sense you over the horizon.

It can communicate silently with other basilisks, summon them to join its hunt, coordinate so that there is always one basilisk in your path, waiting for you.

Sometimes a basilisk will not kill you when it can.

In those cases your fate will be worse than death. You will be enslaved and worked to death, or you will be imprisoned forever in a tiny cage, to go mad with boredom and misery and lack of companionship. Either you will be castrated, or the children of your brief, brutal, forced matings will share your fate.

Often after years of imprisonment and every conceivable form of violation you will be eaten anyway.

Until recently, basilisks were only mythical demons. They were said to live in forests and savannahs where the wise did not go. They were few, and they did not stray from their territories.

But recently, they have discovered a new source of magical power. Always the deadliest things in the world, they have grown in deadliness to surreal levels. Nothing can stand against them. All creatures fear them, except a few inexplicable terrible allies, slaves swollen on the profits of their collaboration with evil.

And the basilisk breed. Where once they were few, a deadly but rare predator, now they grow without limit. Suddenly they are millions, tens of millions, hundreds, billions and they will not stop multiplying until there is nothing left of the world but basilisks. And there is nothing in the world that can stop them, or that will even dare to try.

Perhaps I am laying it on a bit thick here? My monsters are too terrifying to be believed, you say?

I killed an ant yesterday. It was walking across our stainless steel sink. I turned the tap on and it swirled down the plughole. I don't have a big problem with ants. In fact I like them. It's just that they're not the sort of thing one likes to have in the house. If I hadn't been feeling a bit ill, and only dressed in my dressing gown, I'd have caught it in a glass and put it outside, like I did with yesterday's enormous hornet.

I think most people would have used fly spray on the (huge and terrifying) hornet. I was feeling brave.

Oh yes. The basilisks can magic the very air so that it kills you when you breathe it by filling your lungs with knives. There's no way to tell the magic air. The first warning you get is when your lungs start to fill with knives.


Imagine what it's like to be a creature 'sharing' a world with a higher intelligence.