The Falsifiability of Classical Mechanics


So I am currently enjoying an argument with Smiling Dave on his excellent blog:
http://smilingdavesblog.wordpress.com/2014/02/16/top-ten-economic-blunders-according-to-mises, and it has wandered around, and like all arguments, touched on philosophy.

If Jupiter pulls a loop the loop, that doesn't disconfirm *my understanding* of physics. That's in flat contradiction with physics, and it means physics is wrong. Similarly with evolution and fossil rabbits in the precambrian.

And this is a very good question indeed, and deserves an answer, but it is not about Austrian Economics so I am reluctant to clutter up Dave's blog with it, so here it is instead:

Classical Mechanics is dead as a theory of how the world works. It survives as an abstract mathematical model. And we still teach it. And it is still a very useful tool for understanding and predicting things. But anyone who actually thinks that the world works like that is a crackpot and will not be welcome at the sort of parties that mathematicians and physicists like.

Classical Mechanics died before the end of the nineteenth century, from many directions at once. Once people twigged that the "atoms" idea was actually true, and worked out how electromagnetism worked, and started measuring what happened when tiny fast things crashed into each other, classical mechanics was dead.

People used classical ideas to predict how the atoms behaved, and those predictions were unambiguously wrong. For a time they tried to patch the theory up by adding extra rules, but all those attempts failed miserably.

And so philosophers went from debating whether classical mechanics was just "true", or whether it was "necessarily true", to criticizing mathematicians and physicists for having ever thought it was true, since it is so obviously false.

And I hate to admit it, but the philosophers had a point. If you know a little quantum mechanics, and the modern ideas about how matter works, you realise that the classical theory was obviously wrong all along, and that if people had only thought a bit harder about it they would have realised that the world couldn't possibly have worked that way.

Classical Mechanics survives only as a mathematical theory, and in the sense that it is a 'limiting case' of general relativity and quantum mechanics.

But it is still just as useful as it ever was! And remember that that was very useful indeed. Every invention between Newton and the atomic bomb was invented using classical mechanics. Which means that the rise of the West and so the entire history of the world since Newton are squarely the fault of classical mechanics. It is a powerful set of ideas which happen to be untrue.

It can these days be characterized as "A simplified form of general relativity which is appropriate for predicting the behaviour of medium sized slow things, say anything between a cricket ball and a planet, but even then it will be wrong in ways that are not too difficult to spot, once you know what the real answers look like."

Now in fact, very shortly after Classical Mechanics collapsed, dead and greatly lamented by its friends, Einstein and Bohr came up with a couple of new theories about how very small, very large, or very fast things went about their business.

And surprise surprise, those theories turn out to be (a) much better at predicting the behaviour of vsvlvf things, and (b) much less intuitive to human beings, who after all have minds adapted to comprehend the behaviour of the sorts of things humans have to deal with in their daily lives.

Although a conversation with an undergraduate about physics will usually quickly disabuse one of the notion that classical mechanics is intuitive. Our built-in mental models are much more like Aristotle's version of physics, which is even more wrong.

Another surprise is that General Relativity and Quantum Mechanics are also obviously wrong! They are completely different theories, and can't both be true in the same universe. And GR makes predictions even more absurd about small things than CM did, and QM is completely incapable of dealing with gravity. And also QM is famously very strange philosophically, in a way that is hard to explain, but it feels as though it is pulling clever tricks on one at every turn. And the only obvious, straightforward way to interpret the maths is so mind-bogglingly weird that no-one really buys it.

So it is our hope that there will one day be a nice big Theory of Everything that can reconcile these two theories, and make predictions about stuff without having to bring in all sorts of ad-hockery and special cases. But we sure aren't there yet, and we may never get there. And the smart money says that if we ever find this theory it will be even more weird and its implications even more bizarre than Quantum Mechanics, and that it will include General Relativity as a special case in the same way that Classical Mechanics is a special case of General Relativity.

But if Jupiter actually pulled a loop the loop, that would be much much worse.

The orbit of Jupiter is one of the places where Classical Mechanics applies almost exactly. There are tiny corrections from General Relativity, but nothing that is going to cause loop-the-loops.

And the orbit of Jupiter has been successfully predicted since Newton's time, and is one of the things we know almost for sure about the universe.

If Jupiter pulled a loop-the-loop, then I think our reaction would be utter incredulity. In fact I think we'd instantly imagine fraud, deception, or incompetence. Even if the data were completely unambiguous and there were millions of witnesses and no possible way it was a trick, I think we'd end up treating the event in the same way we treat the Miracle of Fatima, as a massive delusion simultaneously and inexplicably affecting vast numbers of intelligent and reliable minds.

And I think we'd be right to. Unlikely as that is, it's way more likely than Classical Mechanics being so completely wrong about something that is so unambiguously in its domain.

But if Jupiter repeatedly and unambiguously started pulling loop-the-loops, what then?

(a) Someone comes up with a new theory that cleverly and elegantly explains what is happening, and explains all the previous data as well, including the near total success of CM on planetary orbits to date, which I reckon is a 'highly non-trivial' thing to do.

(b) We give up. We figure that even though we've got all these clever physics theories and they explain so much so well, we just can't trust that way of thinking. We go back to believing that the universe has a mind of its own, and that angels push the planets around, or that we're living in a giant computer game, or some such wooo. We'll still use our theories, because they're so useful, but they're just 'rules of thumb' for working out 'how angels like to move planets'. And science as a philosophy is dead. We live in a magic world.
Posted by John Lawrence Aspden at 3:14 PM 0 comments

Little Cameron again. Not quite up to speaking yet, but fascinated by the bouncing ball bearings and pointing out interesting details thereof. 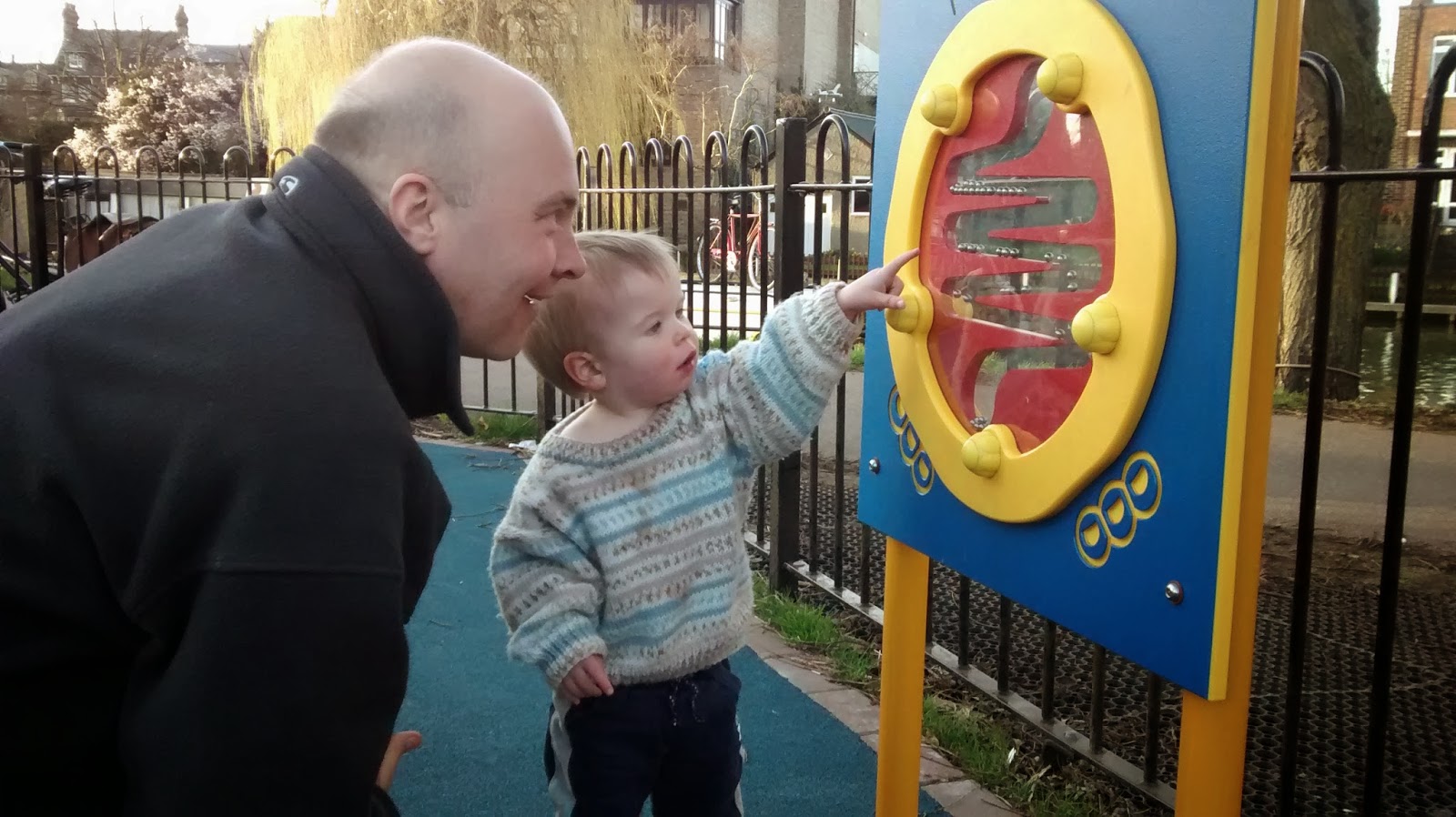 Posted by John Lawrence Aspden at 12:44 AM 0 comments