Hacking Your Own Mind at the Age of Four


I have a friend, who for the sake of his anonymity I shall refer to only as Sips.

Sips has a wonderful, a remarkable ability with dates and numbers. Until recently, I thought that he had savant abilities. It was said of Ramanujan that every number was a personal friend, and Sips is like that with history. If you give him a random date in the last 2000 years, he will tell you all the interesting things that happened in that year.

I am a useful man in a pub quiz, but there is little point to having me along if Sips is there, because he appears to know a strict superset of all the things I know.

My only comparable talent is an in-depth knowledge of the rules of 2nd edition Dungeons and Dragons, which isn't even much use for playing Dungeons and Dragons these days, since the young departed from the wisdom of their elders and forsook the ways of Gygax. 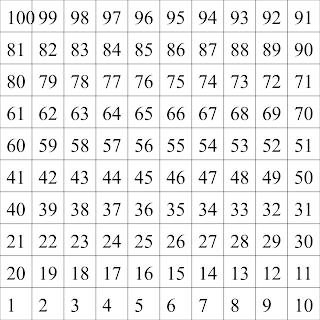 Sips liked the pattern, and he noticed that historical events make nice patterns on a snakes and ladders board.

If you number the squares 00-99, you can draw centuries.

See what a nice shape it makes: 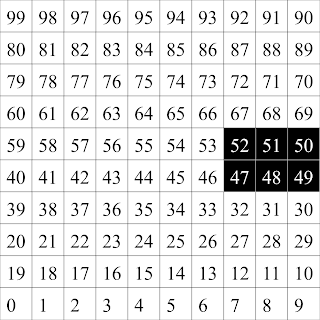 A symmetrical box in the middle of the right hand edge of the board.

Now you will remember for the rest of your life the dates of the Black Death in England, which were ??47 to ??52.

That's it for me. All the dates I can remember.

When I was a child, I was a slave.

My country considered it so important that I know certain things that they took my childhood away, and replaced it with mostly dreary years of sitting in stuffy rooms on cheap uncomfortable chairs at nasty vandalised desks coated with old chewing gum listening to lectures.

I had no choice in this matter. I was a slave.

The most egregious horror of all those years was called 'Music'.

Some pillock decided that one hour of my precious childhood every week was to be spent, not learning to play music, or acquiring the difficult and valuable skill of listening to music, but to memorizing the dates on which various composers lived and died.

As if the most important thing about Mendelssohn was not the sublime violin concerto in E minor, or how his runaway success poisoned Wagner's mind with anti-Semitism. Or how that led Wagner to write an essay which led to the most important, the most gifted, the most human and the most humane of all the romantic composers to be remembered as a partisan of a retarded ideology invented sixty years after his death by a stack of nasty comic fatheads who didn't understand the first thing about the Ring.

As if the most important thing about Mendelssohn was not his music, but his fucking birthday.

I am happy to say that I have no idea when Mendelssohn's birthday was.

Sips, who has little interest in history, and who considers that music began and ended with Bach and then reawoke only with the invention of the five bar blues, and who considers the entire romantic movement to have been an unfortunate failed experiment, can tell you not only Mendelssohn's dates, but can tell you a significant historical event for every year of his life. He will know the date of 'The Jewish Influence in Music'. He will know the date that the Ring was first performed in Bayreuth, even though he has never heard the Ring.

There was widespread amazement recently when he bet a historian a bottle of whisky over the date on which Martin Luther nailed his 95 theses to the door of a church. He lost. He was out by two years. The smart money had been on Sips.

I can't remember my own mobile phone number. Nobody remembers mobile numbers these days. Why would you? How could you? You never dial them. Every time someone drops his mobile in the river while drunk they change anyway. You get an e-mail with the new one, and put it in your phone. The whole number is ten digits or so long. Human beings cannot remember ten digits in short term memory. As it goes from your screen to your phone, you do not hold it all at once, and that's the last time you ever see it.

OK, what was it? No looking back.

So I asked Sips what that friend's mobile number was, and he knew. He'd never dialled it, he said.

I asked him how he knew.

1672 is the date of the Synod of Jerusalem, when the Orthodox church met up to see what it could do about the Reformation.

He'd just noticed that as he was typing it in.

Fall of Singapore, Synod of Jerusalem, Birth of Maggie.

Now all you have to do is ignore the ones, and remember that it's a mobile number:

It described a complicated scheme for remembering long numbers by turning them into English words. One number, when written out using the system, made 'A beautiful naked blonde jumps up and down'. Unfortunately I can't remember the system. But if I could, that number would still be there.

Once he'd explained this to me, and how he did it, I challenged him to multiply two big numbers in his head, racing me doing it on a piece of paper.

He protested. He's no good at mental arithmetic. I'd beat him hands down.

I wanted to see.

I chose two three digit numbers as randomly as I could, and we began multiplying.

It took us both one minute and ten seconds to finish our calculation.

Neither of us was at all confident in our answer. Neither of us had done a long multiplication for years. Both of us had had to reconstruct the algorithm from first principles while doing the calculation.

So it is of no relevance whatsoever that he was right and I was wrong.

You can't do this in your head. You just can't.


You haven't got enough short term memory to hold all those digits while working out the small sums and products that make up the bigger numbers, and simultaneously working out the algorithm from first principles.

I found it hard enough on paper. I have a degree in mathematics, which I may have mentioned.

I just checked the above sum on computer. I couldn't remember the two numbers I was supposed to multiply, and had to come back and look, and say to myself a couple of times seven hundred and fifteen two hundred and sixty seven.

There are countless experiments that prove that seven digits (plus or minus two) is it for the human memory. You can't hold two five digit numbers reliably in your short term memory even if they've got your undivided attention.

But Sips can. Once he's thought of a number, however long, it becomes a sequence of historical dates.

And anyone can remember Catharine the Great, publication of Schubert's lieder, Agincourt for a few minutes while thinking about something else.

Now of itself, this is just a magic trick. My friend has superhuman powers, but not of a particularly useful kind.(although as long as humankind organise quizzes in pubs he'll not starve).

But it got me thinking about how immensely powerful our minds are, and how crap they are at the same time.

I can ask my computer what the factorial of 10000 is (1x2x3x4x5x....x9998x9999x10000), and it will tell me, in much less time than it takes me to ask the question, what the answer is. It will not get a single digit wrong, and the only way for me to check that is to ask a different computer the same question in a different way.

The interesting, brain bits of a computer are five or six very small pieces of silicon, on which some exceedingly intricate patterns have been engraved.

My brain is a large piece of exceedingly intricate flesh, of roughly the same complexity per tiny bit as a computer.

In an evolutionary sense, it cost a fortune. Your ancestors had very many fewer children than they could have had because they had to pay the enormous energy cost of their brains.

The complexity of the two things, brain and computer, is not even comparable. The brain blows the computer out of the water. It is very, very much larger that the thinking parts of the computer, which are about the size, in complexity terms, as the brain of an insect. On the other hand, the computer is so much faster that brain and desktop computer may be around equivalent these days in terms of raw processing power.

And yet the computer can do, effortlessly in minutes, things that all the humans on the planet working together single-mindedly could not do in a million years.

Where is all that human brain power going? What is it for? How did it pay the cost of its existence over evolutionary time?

We're not some weird sport. We are the cleverest of the animals, but we are animals. And other animals also have brains. Large, complex, expensive brains that are utterly *rubbish* at things that are very easy for computers.

What is it that animals do with all that brain?

Why are computers not clever?

Sips told me that. When I asked him how to remember my phone number, which I had been unable to remember for some five years until that date. Now it's easy. As a bonus, I can also remember the date of Stalingrad, and when John Napier was born. And the number 29.

Six months after this article was written, I decided to show it to Sips before publishing it.

He tells me that I must have made up the multiplication example, because the answer was 231256.
I don't remember writing the article.

And he tells me that that can't be the phone number, because he doesn't remember any phone numbers that start with El Alamein.

And he tells me that in any case I have got the wrong Margaret Beaufort. I'd looked it up on the internet, which isn't good enough apparently, because I got her Mum or something.

Seven plus or minus two (digits) is only for English speakers. If you speak Mandarin apparently you can remember exactly ten digits. This is because Mandarin digits are all one short syllable. And apparently the audio-loop we record is exactly the same length in everyone.


There's considerable doubt as to the dates of the Black Death. Sips' dates are not the modern accepted dates.

But now they are in your head.