In recent years I've become more and more worried about the ability of modern youngsters to let their hair down and enjoy themselves. Their parent's generation, which cared very much about self-expression and exploration, seemed to have failed to pass on the flame.

Harmony Korine's fundamentally feminist, and yet light-hearted remake of the Bacchae has fully put my mind at rest. I am relieved to note that with one glorious exception, the music is execrable throughout, as it should be.

If the film is to be taken seriously, with its many scenes of young people enjoying themselves in the most life-affirming manner, then it must be said that it's essentially about what it means to be a man. 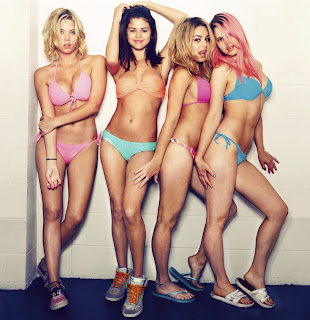 But you can tell that it's a feminist film because it passes Wossname's test: It contains more than one woman. The women have a conversation. That conversation is not about men. Job done bitches. Also the powerful eroticism of the water pistol.

It is come that we might have life, and have it more abundantly to boot. I shall never listen to Britney Spears in the same way again.

I really want to get out of here. Everybody else already left.

We're just having fun. We didn't do anything wrong. This wasn't the dream. It's not supposed to end this way.

You can't be scared yall. Let's just get the fucking money and go on spring break.

We robbed the chicken shack with squirt guns.

I really wanted to hear more of the history lecture.

There was blood on the piano keys.

Descent into evil / descent into hell / fundamental message of redemption through suffering blah.

the wages of sin seem rather generous

The film contains several disturbing scenes of religious activity, and is unlikely to be suitable for the very young.
Posted by John Lawrence Aspden at 7:55 PM 0 comments